The £4.25m Cracker Crisp campaign is an effort to promote the biggest product launch from United Biscuits this year through a Publicis-created TV ad as well as social, digital, PR and experiential activity.

The brand is also using mobile targeting to reach consumers who are up to 250m from “relevant supermarkets” such as Tesco store, suggesting they try the new product through “dynamic creative”.

It is also teaming up with Buzz Agents, a word-of-mouth marketing company that it hopes will help it get consumers to recommend the product to friends and family in the digital space.

The launch is part of United Biscuits’ effort to “do more with savoury biscuits” by driving awareness and trial of the new product according to the brand.

Ted Linehan, director of savoury brands for United Biscuits, told Marketing Week that research conducted by the brand showed that around 40% of biscuits sold in either the US or Australia are savoury compared to only 18% in the UK.

“There’s a significant opportunity to do more with savoury biscuits,” he said, adding that the company wants to “explode” this side of its snackable business by investing more than half of its media spend for 2015 into the Cracker Crisps campaign.”

A two-day pop-up bar in central London will offer savoury cocktail flavours such as Chilli Con Carne, Plum Spring Roll and Fish and Chips while the brand will launch its “biggest ever shopper program” with sampling but in and out of store and the launch of a new “Handi-Pack”.

“It’ll be the heaviest media spend that we’ve done against any one initiative ever, at least the biggest in the last 15 years,” Linehan added.

While the brand has a high level of trust among UK consumers according to Linehan, it is not viewed as “the most modern and up-to-date”, presenting a challenge Jacob’s hopes to address with the new campaign.

“We walk a fine line between modernising and being true to the heritage of the brand,” he said.

“The most important way we see of modernising the brand is in the product that we offer. We want to move it from being trusted to also being loved, and making it feel like a modern, up-to-date brand you want to interact with every day or week, rather than once a year when you get the cheese and crackers out.”

In order to increase the number of options for consumers “at different occasions of the day” Jacobs relaunched its Mini Cheddar and Crinklys products last year.

Now, it says that Cracker Crisps is providing a “slightly more upmarket, premium product that we would see as suitable evening snacking with a glass of wine”.

The masterbrand campaign has seen “spectacular results” so far according to Linehan, with the company’s savoury biscuits up by 7% in value sales year on year in the company’s latest results, ahead of the 5% average in the market.

Jacob’s Cheddars were also up by 16% year on year while Crackers & Crispbreads were up by 12%.

The move comes after Mondelez announced in April that it would invest £10m into the launch of “Ritz Crisp and Thin” and a new campaign for the Ritz masterbrand as it looks to balance out a “disproportionate” investment favouring its sweet products in order to grow its savoury snacks business.

Linehan said: “We’re clashing with a couple of our competitors making moves into similar baked snacking territory, but I’m very confident that our product is the best.”

He added that while consumers appreciate the health benefits of baked products, they are “programmed to accept a taste compromise”, adding that Cracker Crisps are the “first product where there’s no taste compromise whatsoever”.

“Now we need to make sure that our commercial effort, marketing and sales effort matches up to the product that we’ve got,” he added. 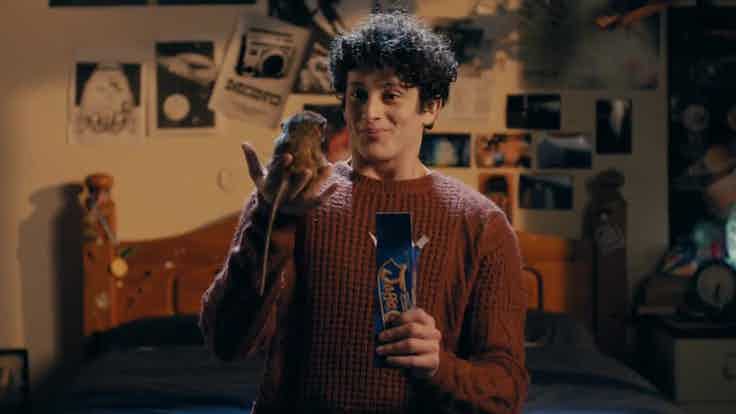