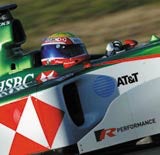 The Jaguar Racing Formula One team has appointed former Jordan F1 marketing boss Mark Gallagher to lead its sales and marketing team, as part of an overhaul of its commercial strategy.

Gallagher’s first challenge will be to retain HSBC as a headline sponsor. The financial services giant is reviewing its &£15m-a-year sponsorship, following confusion over television viewing figures (MW March 18).

Gallagher has been recruited to relaunch the Jaguar brand as a more desirable sponsorship property. His brief will include finding new sponsors, as well as retaining existing partners such as Beck’s beer and Red Bull. He will bolster the marketing team with two new sponsorship positions and a licensing manager.

Gallagher, who will hold the newly created title of head of business development, spent eight years at Jordan F1 as marketing director. He left the team in June last year to join sports consultancy Essentially Sport as director of marketing and communications.

Gallagher says: “I will make the team more marketing-focused as we need new sponsorship.” He adds that the team is specifically looking for new sponsors in the IT and packaged goods sectors.