The new model sees Jaguar return to the luxury sedan segment with a model aimed squarely at the Audi A4 and BMW’s 3-series. It will cost from £27,000 when it goes on sale at the start of next year, substantially less than Jaguar’s usually retail for.

Speaking at an event in London last night (9 September) to unveil the car, Jaguar’s design director Ian Callum said: “This is a breakthrough moment because this is an attainable Jaguar. It will take the Jaguar brand to a whole new group of customers all around the world. Customers who love driving, who want performance and who demand efficiency. This is what we hope will be the next great Jaguar.”

Speaking to Marketing Week at the same event, Jaguar’s UK managing director Jeremy Hicks admitted Jaguar had previously excluded a large proportion of the car-buying public by focusing on more expensive and powerful cars. The XE is an attempt by Jaguar to become more “inclusive”, he said.

“We moved away from a certain audience because we didn’t have a car that was accessible. Now we’re including those people so we’ll be on their shopping list. We’re looking for a younger demographic, no doubt about that. We’ve got a comprehensive plan that is not just about one car but about a number of cars,” he added.

Jaguar brought a different spin to car launches with its event, which Hicks said aimed to get across the car marque’s history in engineering and design, as well as its iconic place in British culture. It included a 90-minute performance by actors, singers and dancers that gave viewers a whistle-stop tour of Jaguar’s best cars – including the E-Type and D-Type. 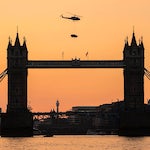 Jaguar also filmed the XE attached to a helicopter in East London and travelling along the Thames on a boat. Hicks says Jaguar was keen to make the most of the “incredible power of social media” to excite people about the new model, creating content it hoped would resonate.

Jaguar is seeing strong growth, with sales up 13.5 per cent in the first six months of the year to 9,826 cars, giving it a 0.76 per cent share of the UK car market according to figures from SMMT. However BMW sold 75,122 cars while Audi sold 83,761 and both also experience double-digit growth.

Jaguar has tried to appeal to a broader audience before with the X-Type, however that model failed to shift enough units to put Jaguar on a par with BMW and Audi. However, Hicks said the focus on design, engineering, efficiency and performance would help Jaguar become a major player in the market this time.

“We are an authentic choice. There is a real place for us and we want to give people the choice. We have a potent formula of the right product, positioned and priced the right way. We say bring it on, come and try us out,” he said.