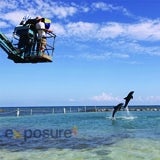 The island’s tourist board is to launch its first global marketing campaign, using the new strapline “See us in a new dimension”, to attract more than just couples celebrating their honeymoon.

It is hoped the activity will boost visitor numbers following a 2% drop in holidaymakers last year.
A 3D film showing different aspects of the island set to a version of One Love by the Reggae Philharmonic Orchestra will form the centrepiece of the campaign, which launches next month.

The film shows people enjoying “soft adventure” activities such as swimming with horses and bobsledding in the rainforest.

“The minister asked us to come up with something really different and eye catching, so we seized this opportunity to create a 3D film because we thought the best thing we could do is show people just how beautiful Jamaica is.

“We wanted to create something that stands out in a crowded sector,” she adds.

People will need to register their details on the JTB website and be sent a pair of glasses in order to view the film in 3D. It will also be shown in selected cinemas.

Fox says this will mean the JTB can collect information on interest in Jamaica for future targeted activity.

To see Jamaica Tourist Board