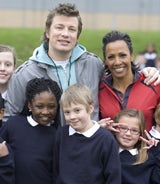 The ad features Dame Kelly coaching children to hurdle and throw javelins while Oliver teaches them how to make a smoothie.

The ad, created by AMV. BBDO, breaks today (17 February) and it is the first time Oliver has starred in a campaign for Active Kids.

Dame Kelly has been an Active Kids ambassador since the programme launched in 2005.

Sainsbury’s customers can collect Active Kids vouchers in stores and donate them to local schools, nurseries, Scout and Guide groups to redeem against sports and activity equipment and experiences.

Sainsbury’s has extended the Active Kids scheme to include Clubmark accredited sports clubs which means that an additional 10,000 sports clubs can collect the vouchers and benefit from sports equipment.

Sainsbury’s aims to donate £100m worth of equipment to schools by 2011.

Yesterday Sainsbury’s revealed that it has become the world’s biggest retailer of Fairtrade products.