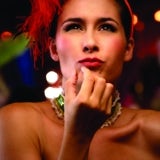 The ad features Donovan dressed in fishnet tights and suspenders playing the role of Ringmaster at the cabaret themed party. He leads the Iceland mums in a can-can dance.

Iceland says the campaign is part of its strategy to refocus its advertising on customers.

The campaign, created by (Beta), is the first the agency has worked on since being appointed by the frozen food retailer.

The ad launches on Sunday (14 November) during the new series of “I’m a celebrity get me out of here”, which starts Saturday (13 November). Iceland is sponsoring the show for the fifth year running.

The TV ad will be supported by a PR, press and digital campaign and in-store marketing.

Waitrose, Tesco, Morrisons and Asda have all revealed their Christmas campaigns in the past two weeks.