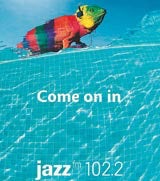 Jazz FM has appointed Kitcatt Nohr Alexander Shaw to its £2m advertising account. The appointment is part of a overhaul of the Jazz brand which will involve the chameleon icon being scrapped.

Kitcatt pitched against Soul, Finex and incumbent WARL Change Behaviour to win the business (MW December 5, 2002). The first meeting between Kitcatt and Jazz FM will take place this week, and the new campaign is expected to be launched in the spring.

The relaunch comes after owners Guardian Media Group, which acquired the station last year (MW June 6, 2002), carried out extensive research into listeners’ views on the station.

Jazz FM marketing director Nicola Thomson, who made the appointment, says the station had to take stock of what the research conveyed and it found that recall levels for the chameleon were too low for it to continue.

Thomson says Kitcatt was appointed because it gave the best answer to the brief – to attract new listeners to the station. Jazz FM introduced a new schedule on January 6 that includes new presenters, such as Jazz pianist and composer Ramsey Lewis, to support the relaunch. It has also launched a Soul and Soccer Saturday afternoon show on Jazz FM 100.4 in the North.