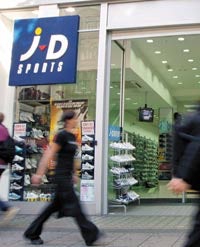 Helme, who takes up the post on August 11, will oversee the division’s development. It includes the JD Sports, First Sports and Size chains. He will report to group chief executive and managing director of sports Barry Bown. The appointment of Helme, who has also worked in trade marketing at Reebok, follows a restructure of the company, which was announced on July 1.

The group has also created a fashion division, which includes new fashion chain Open, and is headed by Richard Percival, who has joined the division as managing director after ten years at Reebok.

The restructure of the business, which has been carried out by group chairman Roger Best, comes after a difficult year for the company following its acquisition of First Sports last year. Group marketing director Tim Gardiner, who had been with the company since 1998, left the company in June as part of the review.

The group is hoping the reorganisation will enable it to concentrate on developing the fashion arm without losing its focus on its sports chains.