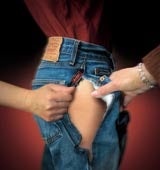 Denim is undeniably tough, but our love affair with branded jeans may be getting threadbare. Just five years after the resurgence of jeans as a cool fashion item, sales are slowing and the market has become increasingly fragmented.

Brands such as Levi’s, Wrangler and Lee Cooper are being torn between retailers like Matalan and Marks &amp; Spencer on the one side, and premium brands such as Diesel and Miss Sixty on the other.

The jeans market has enjoyed sustained growth since hitting its lowest ebb in 1997, when the success of combats and casual pants left denim in the shadows. But that growth is starting to slow, and while the market leapt nine per cent in the year to February 2003, it saw sales growth of only two per cent for the year to February 2004 (TNS FashionTrak).

The brands that previously led this market with higher-quality products and large varieties of styles and finishes have become victims of their own success. High street retailers have cottoned on to the massive consumer appetite for denim and are offering quality products, but for a far lower price than the middle-market brands.

While premium brands such as Diesel and Miss Sixty continue to build their market share alongside their high street counterparts, the mid-market brands are looking for new areas of potential growth before they find themselves forced out completely.

Lee Cooper, the UK brand that was acquired by Matalan in 2001, has revealed plans to launch in the US in a bid to find new markets (MW last week). Wrangler, owned by Belgium-based VF Corporation, has also been forced to act and last December it appointed advertising agency BSUR to help it target younger consumers (MW December 11, 2003). Even Levi’s, which according to a report by Mintel is still the market’s leading brand, is being forced to look for new revenue streams and has launched value range called Signature, already popular in the US and Australia, through UK supermarket Asda.

While the jeanswear market has a history of peaks and troughs, this latest peak has been its highest point by far. Last year, the total market was worth &£1.6bn in Britain. This growth has been driven by product innovation, but more crucially by female consumers. FashionTrak figures show sales in the women’s market hit &£713m in 2003, putting it ahead of the men’s market for the first time. In the same year, women across Great Britain bought 33 million pairs of jeans, more than double the figure for 2000.

But industry experts believe that while a core volume of sales will remain, the market will begin tailing off. FashionTrak business group director James Hobbs says: “The unit sales in the female market has hovered around the 30 million mark since reaching its peak. I seriously doubt that it could reach 60 million units as the denim market is unlikely to rise at this rate again unless it sees a significant decline first.”

Mid-market jeans brands face the challenge of trying to enlarge their slice of a market that is no longer growing. However, Wrangler European brand director Mark Cuthbert points out that the jeans industry, and apparel in general, must be adaptable to see off new competitors. He says: “We need to keep consumers interested through product innovation. During the Nineties, the market drifted on the back of sales of the basic product, but now there are new weaves and finishes and there is a demand for more of these. Manufacturers are also experimenting in new types of product, moving away from the basic five pocket jean.”

Jeans brands are acutely aware that innovation is the key to winning consumers back from retailer own brands. Levi’s may have a 15 per cent share of the market, but it suffered a disappointing 2003, with sales down to &£2.22m, compared with &£22.5m for the previous year. It also has Marks &amp; Spencer snapping at its heels with a nine per cent share.

For the mid-market brands, women offer the biggest area of potential UK growth. In 2003, 69 per cent of jeans bought by women in Great Britain were retailer brands, whereas only 16 per cent were from jeans brands. In the men’s market, the brands are slightly ahead, with 45 per cent of men’s jeans bought in 2003 being branded, and 37 per cent coming from retailers.

Levi’s is tackling the sales dip by segmenting its market and developing different products for vastly different consumers. The launch of its Signature range, priced from &£25, is clearly aimed at the value end of the market. In 2001, Levi-Strauss won its case to stop supermarkets selling its products when they were sourced through the grey market outside the European Union (MW November 22, 2001), but the potential revenues to be made from sales on supermarket racks have made an impact on company management. The dilemma that Levi’s faces is being associated with the lower end of the market while still remaining fashionable.

Levi’s European marketing director Rachel Johnson says that there is no reason why such a large brand cannot successfully segment. “It means that we must have a very clear vision about segmenting in terms of distribution and pricing.”

Pepe Jeans UK sales and marketing director Terry Pearman believes mid-market brands that have segmented in this way risk a dip in sales as a wider distribution will cause consumers to see them as being “common” instead of “fashionable”. He says: “The clever brands are those that stick to a clear distribution policy.”

It is the same issue that industry insiders believe Lee Cooper faces in the UK. The brand has standalone stores that carry its fashion lines, but owner Matalan stocks Lee Cooper-branded jeans as well. One insider says: “Matalan is a value retailer, that is the basis of its offer. The Lee Cooper brand runs the risk of being tarred with the same brush and in a competitive market like denim, that is a problem.”

Lee Cooper product and marketing manager Rachel Hearson admits that it is a challenge and says: “We are trying to differentiate between the Matalan range and the higher end. In the past, Matalan sold very standard jeans from the grey market and that pulls in a very different type of consumer.”

High-end brand Diesel is also segmenting, but by going further upmarket rather than down. The Diesel Denim Gallery sells limited-edition premium product exclusively in these standalone stores, and a women’s range will launch next month. Levi’s is also aware of the huge potential in the female market and has launched a print campaign targeted at women. It also opened a store aimed exclusively at women in Paris last autumn.

But Pearman believes that what’s good for Levi’s is also good for the rest of the market. This is because of the large marketing spend the company puts behind product innovation, such as its Engineered range, which boosts interest in the sector as a whole.

Johnson agrees, but adds: “Television will always be the medium to get you in touch with the mainstream consumer, but there is a need to add texture to communication with below-the-line and more tactical work as well as other forms of above-the-line.”

There is potential growth for mid-market brands, but it will require the companies to keep a keen eye on changing consumer trends and developing new products. They also have to look at creative ways of reaching the consumer to help to give their brands a point of difference in a crowded market.

But if the brands give an inch, high street retailers will exploit it. They are now manufacturing high-quality versions of higher-end jeans and getting them in store within six weeks. The mid-market brands need to be able to compete in terms of speed and price if they are going to survive.