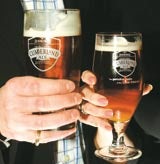 When news reached the Diary of a new way to enjoy drinking, ears pricked up. Used to the old-fashioned pour-alcohol-in-mouth method, excitement raced through the Diary’s veins. Maybe that idea for a Tetley’s intravenous drip had finally been taken up.

Alas, all that has happened is Cumbria-based brewery Jennings is celebrating the first anniversary of the launch of its “sophisticated” beer glass. The half-pint glass, which looks a bit like a wine glass, is meant to encourage women to feel more comfortable about drinking. Obviously the people at Jennings haven’t watched any of the Booze Britain shows that seem to be on permanent rotation on the lowest-common denominator satellite channels. They would then appreciate that women need no encouragement whatsoever to get hammered and flash their breasts at the nearest police officer.

As the picture shows, the “refined” glass claims that Jennings’ Cumberland Ale offers drinkers “the genuine taste of the Lake District”, which by the Diary’s reckoning means that it tastes like Kendal Mint Cake. Now that is a new way to enjoy drinking.