“Seb’s team raised two thirds of the sponsorship money before the economic crisis, so let’s congratulate them for being about the only people who did fix the roof while the sun was shining.”

It is said that £650m of the £700m sponsorship revenue target Olympic bosses set has already been raised nearly two years before the event.

It also wants to raise £80m from licensing royalty revenues and has signed deals with companies including Hornby, which will manufacture several Olympic-themed toys. 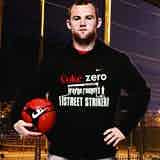 Coca-Cola has confirmed it has dropped Wayne Rooney from a planned marketing campaign after allegations that he had sex with a prostitute while his wife Coleen was pregnant.