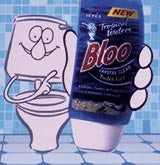 Household goods maker Jeyes is searching for a marketing director following the departure of Neil Kimberley after less than two years at the company.

His move coincides with an overhaul of the marketing and commercial team at Jeyes, which owns brands such as the Bloo and Parozone toilet cleaners, Wet Ones and Sen’chi air freshener.

Marketing controllers Jayne Hazelwood and Simon Mitchell have been promoted to the newly created positions of head of brand development and head of category development, respectively. The company is searching for a marketing director to lead the team.

A commercial team has also been created to work under Julie Fox-Charlesworth, who has moved from sales director to the newly created position of commercial director.

Kimberley has left Jeyes to set up his own technology company. He joined Jeyes in 2002 from Unilever Bestfoods, where he was business unit director for margarines (MW May 2, 2002).

Hazelwood says there will be a review of Jeyes’ business, although she adds the company’s relationship with roster agencies Poulter Partners and John Ayling &amp; Associates has not been affected.

Nickelodeon, the satellite and cable channel, is talking to advertising agencies about a project. Mustoes, which handled a project for the channel last year, is not involved.

BBC Magazines has promoted publishing director of Top Gear and BBC Good Food magazines Ashley Munday to the newly created role of ad sales director. He will report to deputy managing director Nicholas Brett. All the ad directors and their sales teams will report to Munday. The move follows the 2002 restructure of BBC Magazines’ […]