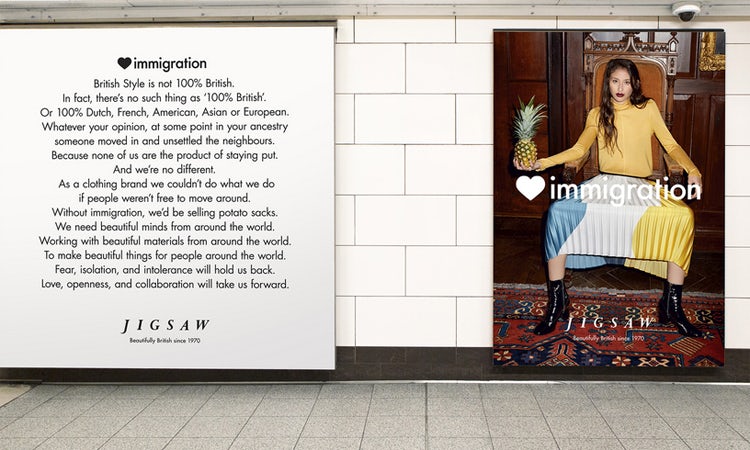 Jigsaw has launched a new campaign built around celebrating immigration as part of the promotion for its autumn/winter range.

The ‘<3 Immigration’ campaign, which includes a full takeover of Oxford Circus tube station in London and The Times website, as well as print, social and digital activity, aims to show how Jigsaw sources materials from across the world while making the point that without diversity its products couldn’t be made.

To support the campaign, Jigsaw has also teamed up with Ancestory.co.uk. It will give its staff genealogy tests to show the diversity of the fashion industry and celebrate the fact there are 45 different nationalities working within the Jigsaw business.

Led by agency The Corner, the campaign fits into a wider move to centre the Jigsaw brand around having a social purpose as part of its ‘Style and Truth’ ethos launched back in 2014.

Speaking to Marketing Week, Jigsaw’s group head of marketing Alex Kelly admits centering a campaign around a controversial political issue such as immigration represents a big risk. However, he says it’s a risk worth taking.

He explains: “There’s no question that immigration is a controversial issue in British politics right now but if you risk making people potentially disagree with you then I think it’s worth it as that still creates a powerful emotional engagement, so long as you have a right to talk to them in that environment. I think we do.

“We were conscious we didn’t want to approach this with a Pepsi-Kendall Jenner mentality and to make a political statement just for the sake of it.”

It is too risky doing something like this if you can’t back it up and will end up doing more damage than good.

Kelly admits Jigsaw didn’t do focus groups to inform the campaign and that the messaging is built largely on instinct. “We looked at the fashion industry and realised no one talks about the benefits of immigration or the debt we all owe to it,” he adds.

“One of our products could have Mongolian wool, Turkish satin, Chinese silk and Italian buttons, so the campaign will celebrate that diversity at a product level but also a broader level too with the DNA tests all our employees are doing. If other fashion brands follow suit then that’s great because there seems to be a lot of fear in this industry around taking a stand.”

And for marketers looking to take a social stand, Kelly concludes: “This campaign really fits into our core brand values as our founder John Robinson started the business by bringing an Afghan coat back to the UK in the 1970s. Our brand is built on immigration.

“So I’d say you have to really back up your message. It is too risky to do something like this if you can’t back it up and will end up doing more damage than good.” 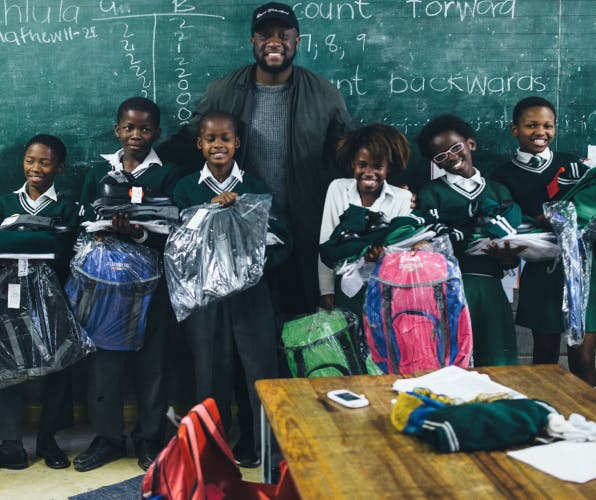 As custodians of the brand, marketers have a critical role to play in implementing purpose across organisations, says co-founder of brand substance agency Given London and former CSR manager at The Body Shop, Becky Willan.