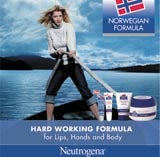 Johnson &amp; Johnson is relaunching its Neutrogena range of Norwegian Formula moisturisers in a bid to appeal to a younger market.

The health and personal care giant is revamping the range, which includes body moisturisers, foot creams and hand creams, across Europe and the UK in the next few weeks.

The relaunch campaign will not feature the brand’s traditional image of a fisherman pulling on a rope. Instead a young blonde woman is depicted, in an attempt to widen the range’s appeal.

The relaunch will be supported by in-store advertising created by Coutts UK, a London-based design agency that specialises in point-of-purchase products and consumer research.

The agency has produced counter displays, free- standing display units and dump bins for department stores using its Coutts View system, which it says allows clients to track a project from brief to completion.

Coutts claims the system is unique, and says its clients can log onto to its website and comment at every stage of the production process, giving them a clearer idea of a project’s development.

Last November, Johnson &amp; Johnson shifted its &£16m advertising business for its Neutrogena and Roc brands out of DDB London and into the network’s Paris office.

Hewlett-Packard vice-president of marketing for Europe, the Middle East and Africa Amanda MacKenzie has stepped down after a year in the role. It is understood she has a senior marketing role lined up, but it is not known where.

Disney kicks off the relaunch of the Muppets next week, with a range of t-shirts designed by celebrities including Robert De Niro and Quentin Tarantino andmark Kermit the Frog’s 50th birthday. The celebrity-designed t-shirts will be auctioned on DisneyAuctions.com to raise money for charity. Disney plans to pump millions of pounds into the Muppets, through […]

Growth in sugar confectionery is at a snail’s pace and new product development is fraught with difficulties. The anti-sugar movement, strict rules on the use of artificial sweeteners and a sector already bursting with brands makes this a hard