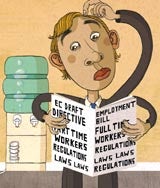 A mountain of paperwork has landed on directors’ desks this year relating to, among other things, the impending Temporary Agency Workers EC Draft Directive and the Employment Bill, designed to protect fixed-term workers. The Part Time Workers (Prevention of Less Favourable Treatment) Regulations 2000 are already being implemented.

Such is the level of concern among agencies that they might decipher the law incorrectly and open themselves to fines that the Field Marketing Council (FMC), through the Direct Marketers’ Association (DMA), has appointed an employment law specialist to try to steady the industry’s nerves.

Zoo People managing director Martin Kiddle speaks for many smaller agencies when he criticises the legislation for being too general. “When we have spoken to government departments and asked them specifically how the new laws will affect field marketing they cannot tell us. Often they are unaware the industry even exists,” he says.

FMC chairman and FDS Field Marketing managing director Alison Williams says the council will continue to lobby Government for clarification. “The field marketing industry recruits three groups of people: full-timers, those working regular part-time hours and a third group, who are used on tactical campaigns often by different agencies when they are needed.

“We are asking questions such as who pays for the paternity leave and pensions for this third group? Until issues like this are cleared up, employment law will remain an area of huge concern,” she says.

The European Commission’s draft directive on temporary agency workers was published in March, but the proposals are unlikely to become law until at least 2003. More than 1 million temporary workers in the UK would receive the same benefits as a full-time worker in the same job. The rules would cover hourly rates of pay, pensions, pro-rata annual and parental leave and contractual sick pay.

The DMA fears that the extra cost to UK companies will be higher than for businesses in other European countries, where domestic legislation already restricts and regulates the use of agency workers. In this country, the relationship tends to be between the employer and the agency. The Employment Bill could affect the number of fixed-term contracts being awarded by some field marketing agencies.

Workers offered four fixed-term contracts in a row would receive the same benefits as full-timer workers, while the bill also recommends statutory disciplinary and grievance procedures in all employment contracts and a right to two weeks’ paternity leave for any father with 26 weeks service. The Part Time Workers Regulations mean that the UK’s 6 million regular part-time workers are now entitled – on a pro rata basis – to the same hourly rates of pay, access to company pension schemes, holiday, sick pay and training benefits as their full-time colleagues.

FMC members, and the largest non-members such as Aspen Field Marketing, already offer their part-time staff such benefits, but until interpretation of the new laws is clarified they want reassurance they will not caught out by new proposals.

Zoo People, FDS and DSPS Field Marketing, for instance, retain specialist human resources firms and if the agencies act on the HR advice they are given this should be enough to avoid any fines. Meanwhile, larger agencies, such as CPM and Aspen, have their own in-house legal support teams, but have still decided to expand their own HR departments.

Part-time workers employed by Aspen have enjoyed full-time benefits for seven years and HR director, Jacqui Vaughan, predicts that by the end of this year the part-time side of the business will grow from three per cent of turnover to as much as 20 per cent and the number of part-time recruits from about 600 to more than 2,100, as clients demand more flexibility from their field teams.

CPM managing director Mike Hughes says the full cost implications of the impending legislation is still unknown, which has made budgeting difficult. “I am opposed to any new law that adds costs to doing business, but I am in favour if changes will make field marketing a more attractive career to potential employees. The idea of the new rules is to weed out bad employers, which we welcome,” he says.

There will almost certainly be some added costs, if only in extra administration, and clients can expect to see at least some of the extra expense passed on to them.

“The majority of clients are aware of the changes because they are familiar with the implications of outsourcing a salesforce. The extra costs involved are not huge, but they must still be explained to brand managers at the proposal process,” says PMI managing director Gail Tunesi.

There is a feeling that field marketing agencies could actually benefit in the long term if policies to meet the new regulations are implemented effectively.

“There are always concerns when companies see new laws in the pipeline but, as with the minimum wage, the effect of these on field marketing is likely to be negligible. The changes should mean we can sell careers in the industry for the first time and retain staff, which should reduce overall recruitment costs,” says Ellert Field Marketing HR director Paul Leach.

Field marketing has always been popular with students and mothers returning to work, but agencies are having to cast their part-time recruitment net wider as clients increase their use of the discipline. The industry is beginning to appeal to aspiring sales professionals, for example, who see it as an opportunity to get their foot in the door with leading packaged goods brands.

“An agency’s greatest asset is its staff and anyone who does not want to commit to full-time working should not be penalised. The new rules will add costs to the activities undertaken on behalf of clients, but the benefits of field marketing in terms of quantifiable and cost-effective results remain,” says Sure Field Marketing managing director Richard Finch.

Headcount Worldwide Field Marketing managing director Mike Garnham says any new laws introduced must take into account the needs of the employer as well as workers. “It should not be a case of seeing everything as a case of reinforcing the rights of employees. Those drafting the laws should understand working environments and make sure directives introduced do not compromise successful good working practice,” he says.

Although the current tax and benefit system was not set up with the field marketing sector in mind, reputable agencies are likely to use the new laws as a marketing tool in their own right to attract clients keen to avoid any negative publicity from being associated with agencies that treat their part-time staff poorly by flouting the employment laws.

Brona Connolly, director of field marketing at Carlson Marketing Group, says that, while FMC members must abide by a code of practice on employment issues, some non-members are happy to agree cash contracts with clients rather than run a payroll.

“If clients are using the discipline for the first time and are not very selective in the agency they use, then there is a risk they will get stung and that would harm their perception of field marketing,” she says.

Of course, field marketing is not the only industry facing big changes to meet its own demands and those of an increasing number of people who want to more flexible working hours, although its position in marketing is probably unique as it relies so heavily on part-time and temporary workers.

The discipline’s growing appeal means the market will continue to expand and this should soften the blow of any extra costs that agencies incur, as long as the new laws are implemented correctly. Ensuring they are, however, is enough to make anyone’s head hurt.