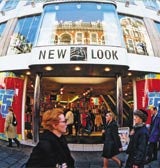 High street fashion chain New Look has appointed John Ayling as its first media agency. The agency will handle media planning and buying for two separate projects – the launch of the chain’s new flagship store on Oxford Street, London; and the introduction of menswear, which is being trialled in selective New Look stores.

The strategy for the menswear initiative is being handled by Prospero, a business consultancy division of design agency 20/20. Michaelides &amp; Bednash is developing the brand positioning for the flagship store. The company has not revealed how much it is spending on marketing these initiatives.

John Ayling has also been handed the &£1m account for the launch of Roberts Radio’s range of DAB digital radios. Roberts is the first major manufacturer to begin large-scale production of digital radios in the UK and a press campaign, created by HDM Agency, breaks this autumn.

In addition, the agency has won the media buying account for Wines of South Africa’s &£500,000 generic consumer campaign, which will appear in upmarket publications to support a national retailer promotion. TMDP Marketing is devising the campaign.

Playtex, the Sara Lee-owned underwear brand, is planning to shake up the body-control underwear category with the launch of its new range, Secrets Make-Up. The range aims to move the category away from problem solving towards enhancing body shape.The range, which will be launched early next year, is part of a move by Playtex to […]

The majority of consumers are not prepared to pay to avoid advertising on television, according to new research from Media Planning Group. The agency commissioned research into “convergence”, to see how the growth of video-on-demand services and the arrival of personal video recorders (PVRs) has affected the use of televisions and computers. ICM Direct carried […]