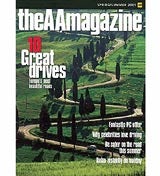 The Centrica-owned Automobile Association (AA) is reviewing the contract for its customer magazine, currently held by John Brown Citrus Publishing (JBCP). JBCP has been invited to pitch.

The AA is holding pitches in a review of its £12m media planning and buying business, handled by Zenith Media (MW August 8).

A spokeswoman for the AA says: “Our contract with JBCP was for one year. This has been extended until February 2003. We are seeking to develop our customer relationship management and with the AA Magazine we want to target two segments – customers who buy personal finance products from the AA and those who buy vehicles from us.”

Meanwhile, JBCP has lost its Ikea magazine business in the UK to Cabal Communications, publisher of Front. Cabal has picked up the pan-European work for Ikea.

Cabal produced the first issue of the Ikea magazine for Sweden, Denmark, Germany and France in September. Next month it will publish an issue for the Austrian market. In the UK and Switzerland, the magazine will appear early next year.