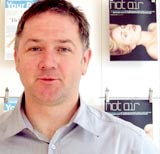 Fitzpatrick was responsible for setting up JBP’s US office in New York, but returned to this country last year.

Andrew Hirsch, the chief executive of JBP in the UK and US, was transferred to New York earlier this year to oversee further expansion plans in the North American market. John Brown remains chairman of the business at its London headquarters.

The IKEA magazine, Space, has a print run of 1.2 million in the US and is one of JBP’s biggest titles.

In the US, JBP also publishes magazines for Nike, supermarket chain Wegmans and Williams-Sonoma, an upmarket US kitchen retailer.

JBP won the Nike account early this year and publishes a magazine called Much Respect in support of the sportswear giant’s Jordan brand (MW May 31).

In May, three of JBP’s consumer titles – Viz, Bizarre and Fortean Times – were acquired by IFeelGood (IFG), the publisher of Hotdog,for &£6.4m.