The £7m campaign, created by Adam&Eve DDB, starts off with family dog ‘Buster the Boxer,’ jealously (see above) looking out the living room window as he watches two foxes, a badger, a squirrel and a hedgehog jumping on Bridget’s trampoline. But come Christmas morning Buster gets his big chance and excitedly pushes past a surprised Bridget to joyously jump on her present trampoline.

The ad is set to a cover by British band Vaults of Randy Crawford’s ‘One Day I’ll Fly Away’, with the song’s slow pace an interesting juxtaposition to the energy of the ad’s animal characters. The ad will debut on terrestrial TV today (9 November) at 9.15pm on ITV1.

The sentimental heartstrings of previous John Lewis ads such as Monty the Penguin and Man on the Moon are noticeably absent. And following a chaotic year of controversial political surprises such as Brexit and the Donald Trump presidency, the plan was to do something lighter according to John Lewis’s customer director Craig Inglis.

He says: “You could say 2016 has certainly been quite a year, so we hope our advert will make people smile. It really embraces a sense of fun and magic, reminding everyone what it feels to give the perfect gift at Christmas.”

To tap into the festive gifting season, there will be an accompanying children’s picture book while each animal in the ad will be buyable in soft toy form (priced at £15) with all proceeds going to charity The Wildlife Trusts.

“Each year we work with a charity which fits our ad, and we hope this year’s campaign will encourage more children to discover a love of British wildlife and encourage support of The Wildlife Trusts,” adds Inglis. 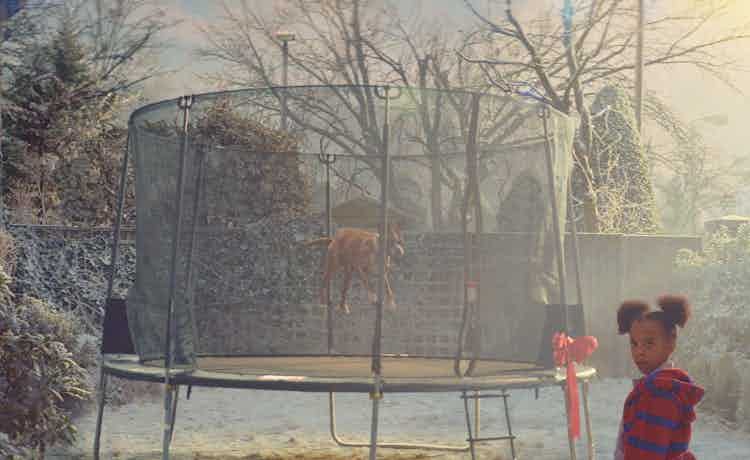 For the first time John Lewis is working with Snapchat on a custom filter that turns users into Buster the Boxer, with all media planning and buying handled by Manning Gottlieb OMD.

This will be activated in John Lewis stores too, with customers that visit any of its 48 shops during December able to apply a Snapchat filter to any pictures taken in-store.

And until Sunday 13 November customers can also activate bespoke Twitter stickers in order to personalise their own photos with Buster and his friends.

In terms of experiential activity, there will be an Oculus Rift VR experience available in John Lewis’s flagship Oxford Street store that allows users to immerse themselves in the fictional back garden and a 360 film available via Google Cardboard.

The department store giant has also teamed up with Sky for an exclusive ‘making of’ video as well as bespoke content spotlighting the challenges facing British wildlife and featuring Wildlife TV presenter Patrick Aryee. This content will be available to Sky’s 12 million customers via a standalone section within the TV network’s On Demand homepage and Sky Go service.

The much-hyped Christmas ad remains the most profitable ROI for John Lewis and it will be hoping the ‘Buster the Dog’ campaign can reverse a recent decline that resulted in a 75% fall in profits to £56.9m for the six months to 30 July.

The department store brand was keen to point out that no animals were made to jump during filming, instead relying on CGI.