It’s been a year since John Lewis and Waitrose unveiled their new visual identities and launched their first joint marketing campaign.

A fiercely competitive retail market had prompted a rebrand a few months prior, adding ‘& Partners’ to both names. But the John Lewis Partnership (JLP), which owns both retailers, wanted to do something big to show customers what actually makes it different from other retail chains.

So big, that the ‘& Partners’ campaign was it biggest outside of Christmas. Created by adam&eve DDB, it included a 150-second TV spot featuring a primary school performance set to Queen’s Bohemian Rhapsody.

The ad introduced the brands’ new visual identities and a new tagline, ‘For us, it’s personal’. It was designed to highlight the role of its staff and employee-owned status, as well as illustrate both retailers’s commitment to customers and give staff morale a boost.

It also aimed to tie the two retailers more closely together in the minds of consumers, creating a halo effect that could work to both brands’ advantage.

While there was an initial big splash, John Lewis and Waitrose have been quietly bringing their brands closer together over the past 12 months. 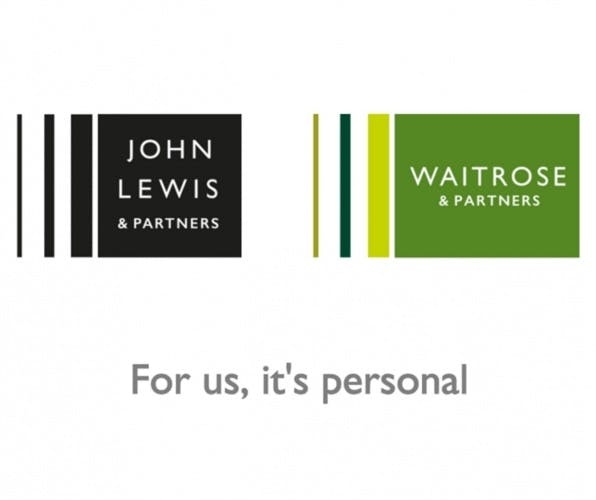 John Lewis & Partners and Waitrose & Partners are hoping the new visual identities will help reinforce their key point of difference in a challenging retail market and provide a halo effect for each brand.

The parent company of John Lewis and Waitrose has finished a year of significant investment in its brand and staff with a huge hole in its pocket – weighed down by a sharp 56% decline in non-food profit.