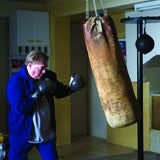 The former Deputy Prime Minister is shown taking his frustration over the cost of insuring two cars out on a punch bag.

The ad apes the incident during the 2001 general election when Prescott punched a man at a rally after being hit by an egg. It also plays up to his tabloid nickname “two jags”, handed to him after it was revealed he had two ministerial cars.

The ad breaks 7 January and was created by Dare.