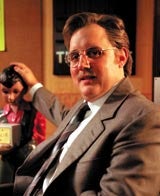 Scottish Courage is dropping its two-dimensional “No Nonsense Man” John Smith’s beer campaign and going back to a human spokesman, as part of a &£20m marketing investment in the brand.

TV advertising featuring Kay will debut during the Champions League Final on May 15, with an ad showing young footballers practising their skills – all except for Kay, who boots the ball into a neighbouring garden and opens a can of John Smith’s.

Other executions show Kay attempting to console his young daughter after she has a nightmare, and trying to convince his 55-year-old mother to move into an old people’s home so he can put a snooker table in her bedroom. The ads were created by TBWA/London also responsible for the Jack Dee campaign, with media planning and buying through MediaVest.

Kay has won a number of comedy awards, including the Northwest Comedian of the Year 1997.