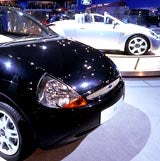 In the past, venues have been the least flexible component of a conference, with clients expected to put up with whatever colour schemes or shapes the place provides. However, with brand identity becoming increasingly vital in the pursuit of customers, clients now expect more for their money, and venues are required more often to provide a space in which clients can display their brand image to its fullest potential.

Last November, Gillette launched Venus, a female shaving system, in the UK as part of a &£140m worldwide launch. It featured four individual events – two in London and two in Cheshire – and guests were treated to a product launch designed to answer the question: What is woman?

“The presentation started in what Gillette called The White Room, which was lit from above to give a soft, gentle effect,” explains Steve Moore, events producer at business communications agency Lineup Communications. “Glass plinths and fountains with curves accentuated the female aspect, along with background videos of women.

“The audience was then led through two raised tunnels flanked by water troughs, complete with atmospheric music and water effects on the walls,” he continues. “These led to the main presentation area, where individual booths were furnished with product ideas and imagery. The product itself was revealed at the stage end of the room. Six feet tall, it emerged through a fountain as tables opened up in the individual booths, allowing the audience to touch and feel the product.”

Although Gillette declines to disclose the cost of the launch, it can be assumed that it took a hefty bite out of the annual production budget.

Gillette is not exceptional, however. The previous month Ford also spent an undisclosed but undoubtedly significant amount at the British International Motor Show at the NEC to demonstrate the Ford brands and hold dealer launch meetings for its new Mondeo.

“With the whole of Hall 4 – at 16,500 square metres – employed by Ford, and 6,800 square metres of that held by Ford Oval to present the Ford brand, we’re confident that this was the biggest single-brand show stand in the country,” says Andy Nicholson, manager of retail and event marketing. “We were killing two birds with one stone – the stand was unique in itself, but we also used it as the venue for the dealer launch meetings for the Mondeo,” says Nicholson.

“The dealers entered at the back of the stand into what they perceived to be a circular auditorium, which gave them access to the whole circle,” he explains. “At the end of the training sessions, the panels that formed the walls moved out and the audience found themselves in the middle of the motor show stand. The panels were then cut back to half length so people could walk underneath them for the show.

“The whole stand created a brand experience that was intriguing for everyone – we had gymnasts, a children’s climbing wall, Transit challenges, race simulators, PlayStations, and at the same time we revealed the Mondeo, the Focus RS, the new Maverick and Explorer and the Transit front-wheel drive. We had about 65 vehicles on the show stand.”

Although every client wants a product launch or sales conference that will be remembered, not everybody believes in taking out a bank loan to do it.

“Clients are very aware of brand image, both in terms of the product and advertising, but it’s more about consistency than money,” says Paul Ashford, managing director of event producers Apex.co.uk. “It’s about the experience delegates have from the minute they walk into the building to the minute they walk out. You don’t have to rebuild a stadium or spend &£50,000 on a video; you can enhance a brand’s image just by focusing people’s attention on one place.

“If you need to do an event for &£20,000 to &£30,000, brand image can be constantly reinforced. The colour of the registration desk tablecloth, the lighting, the delegates’ badges, the speaker material, even mailshots and teaser campaigns can be used to encourage people. In general, colours and shapes are very powerful triggers – everyone recognises the colour of the Virgin logo or the typeface of Coca-Cola. You don’t have to spend megabucks on a huge stage set or rebuilding,” he adds.

“It really depends on how far you want to go,” agrees Rob Kelly, marketing manager at display graphics company Photobition UK Graphics. “You can print onto almost anything – from carpeting to pillars. Large graphics format is at the stage where the limits are set only by budget and the designers’ imagination. We did a launch for Sky TV recently where we themed the ceiling with graphics, covered the tables with branded tablecloths, draped the walls with branded wallpaper and even covered the carpeting with the Sky logo.

“Because venues are having to do more than just provide a space, it’s changing our industry. Instead of deciding on production methods themselves, designers are now coming to us, telling us what they want and asking us to find a way to do it – we’re becoming more of a consultancy than we used to be.”

Martin Neale, general manager of the Concept Centre, finds that offering neutral colours and a malleable space is fundamental for clients to present their brand image, no matter what their budget or style. “The infrastructure of this building is neutral, so no one has to fight with colour schemes and wallpapers.

“Some clients will go to huge lengths to cover every wall, ceiling and floor and we try to accommodate them. The only thing we’ve refused is a client who asked us to paint the entire exterior of the building.”

For some clients, however, no fixed space is ideal, and it is to this market that Edwin Shirley Staging (ESS) appeals. ESS makes temporary, relocatable buildings that can be designed and tailored to a client’s exact requirements. The Skyscape at North Greenwich is one such building.

“The client wanted a venue right next to the Dome that could be built relatively quickly and tailored specifically for them as an events programme,” says Stephen Court, director of ESS.

“There is a market for bespoke buildings, and we work in that niche,” he explains. “Our buildings are like Savile Row suits – we can design them, install them and take them away again.”

With innovations like DIY buildings entering the exhibitions market, the pressure is on for fixed venues to stay abreast of clients’ demands. This is embodied in ExCeL, a new exhibition venue in East London. It can hold 11,000 people, and encompasses hotels, parking, entertainment and retail outlets in an effort to provide all things to all clients.

Nick Davion, head of conferences and special events at ExCeL says: “We hope we are providing a venue people won’t need to disguise by trying to provide a blank canvas for those who like to build from the ground up, as well as breakout rooms which are ideal for clients who don’t have large budgets but still require a good room.”

But although it may seem that the days of the hotel or venue which offers space in the old “take it or leave it” mould are numbered, the shortage of venues in the UK still means that venue owners can call the shots. “In this country there are still venues which have no trouble selling their space so there’s no pressure on them to excel,” says Ashford at Apex.co.uk. “There are still those who couldn’t care less whether you use their venue or not.”

The strength of the pound, however, and the efforts of many venues to please the punters, may mean that attitude won’t last much longer.

The British Association of Conference Destinations, which represents up to 3,000 meetings and events facilities nationwide, is to run its annual exhibition, CONFER as part of the new National Venue Show at the Birmingham NEC from April 11 to 13.

The National Venue Show has become the annual autumn showcase for the meetings and events industry. It runs alongside Reed’s Total Marketing Solutions and National Incentive Show.