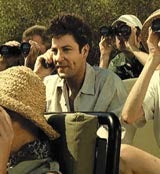 Vodafone has appointed J Walter Thompson as its global advertising agency, with responsibility for advertising strategy and execution around the world. The business is estimated to be worth in the region of £300m.

Wieden &amp; Kennedy, which was appointed in May 2001, will remain as lead creative agency, but the other 20 or so agencies working for Vodafone in the 16 territories it operates in – including WCRS in the UK – will be phased out over the course of the next year.

Vodafone, a leading player in the European mobile communications market, is trying to roll its main brand out around the world, and began a review of advertising and marketing services at the end of last year (MW November 29, 2001). It now uses the Vodafone brand in 14 of the 16 territories it operates in. In Japan, it uses J-Phone Voda-fone and in Italy it has Omnitel Vodafone.

A Vodafone spokesman says the agreement with JWT has no effect on Vodafone’s UK media buying, which is handled by OMD UK. Below-the-line assignments are also unchanged. The spokesman says: “We are looking at creating cost efficiencies across the group, but the deal with JWT does not affect other existing arrangements.”