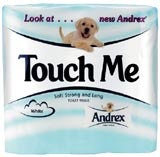 Kimberly-Clark (K-C) has been caught up in a price war affecting its market-leading Andrex brand. Tesco, Asda and Sainsbury’s have cut the price of the toilet paper brand in a move that is likely to hit the sales of their own-label brands.

Other retailers anticipate a further cut in Andrex prices and retaliation when the second phase of price-cuts is introduced. One industry insider says: “It is all about retailers saying who is most macho. It is not going to make people buy more toilet tissue.”

K-C says it does not support the price cuts. Andrex marketing manager Allister Frost says: “The worry we have is that with a power brand such as Andrex, no retailer will want to be disadvantaged. So if one retailer drops its price, the others will follow. But any such decrease in price erodes the category value and is not beneficial to the brand.”

Last year, K-C dropped its own prices after a reduction in the number of sheets in a roll (MW June 28, 2001). At the time it was the retailers that were up in arms about under-cutting their own-branded toilet roll.