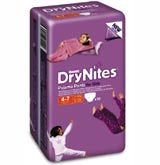 Kimberly-Clark is ploughing &£3m into the launch of gender-specific DryNites products aimed at older children.

The personal care giant is launching a male and female version of its disposable pyjama pants, designed for children over four years old who wet the bed at night.

DryNites brand manager Zoe Creighton says the new gender-specific products address a gap in the market: “Children between the ages of four and seven are very conscious of their individuality and of differentiating themselves as a boy or a girl.

“Bedwetting can be a major issue at such a sensitive age causing both frustration and embarrassment. These products have been specifically created to give children more control and feel more personal to their needs.”

The new products have “custom protection zones”, and have also been redesigned to look more like real underwear. It will be supported by a significant advertising campaign including television, print and a direct mail campaign, which is due to break in February.

The DryNites website will also be updated to provide further advice on bedwetting.

Kimberly-Clark says that its statistics show bedwetting is as common as asthma or eczema in young children, affecting 20 per cent of five-year-olds and ten per cent of ten-year-olds across the UK.