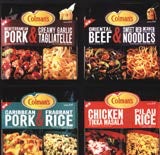 The agency saw off Fallon and Vallance Carruthers Coleman Priest to land the &£1m contract for the 190-year-old brand. The brief for Karmarama will be to develop a new brand positioning.

Colman’s Sauces has not been advertised since 1998, when JWT created an animated pig to promote it. Although the advertising account was awarded to DDB London in 2002, the agency did not produce any ads for the product.

Colman’s is best known for its mustard powder and paste products which, according to 2003 Euromonitor figures, dominated the market with a share of more than 48 per cent. However, Colman’s other products, including condiments, packet sauces and pour-over sauces, are lagging behind the growth of Masterfoods’ Dolmio brand in the sector.

Unilever purchased the company Colman’s of Norwich, which originally hailed from the Norfolk city, in 1995.