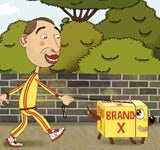 Brand loyalty is a term that is used far more often than it is analysed. It might seem that marketers’ own liking for the phrase comes closer to devotion than loyalty. But talk to a market research specialist and it soon becomes clear that there is more to this apparently simple concept than meets the eye.

Taylor Nelson Sofres (TNS) director Roger Sant explains that “loyalty” can be used directly in relation to behaviour, but “commitment” is the preferred term when talking about underlying psychological attitudes. He cites as an example a mortgage, where there are various barriers to exit, including possible financial penalties. “This might make the homeowner loyal without being committed,” he points out.

Potentially muddying the waters further, Sant brings up the idea of customer satisfaction, again subtly distinct from commitment or loyalty. He says: “You could ask whether you need to be satisfied with a brand to be committed to it. On the other hand, you can be satisfied with a product or service but still be willing to switch to another.” In fact, he argues, all three concepts are important, and market research offers the opportunity to understand and analyse them.

Sant says: “Some consumers tend to be driven by service, others by product, still others by price, and some, maybe, by overall brand image.” Research can help to categorise consumers as being committed or uncommitted to a brand, and to pinpoint what drives their attitudes.

A project of this sort was carried out for Lloyds TSB, he says, with tens of thousands of questionnaires being sent out and followed up, with very positive results. “This was a solid example of working to understand commitment and what drives it,” says Sant. “It meant that follow-up communications could target different people, depending on their level of commitment and what they were driven by. It also allowed the bank to track consumer behaviour over time.”

th direct consumer experience and communications from the brand-owner are important. The way that research findings are followed up to cement customer loyalty and commitment is also of vital importance. Sant points to one research project for a major UK retailer, which found that queueing was the one feature of their in-store experience that consumers most disliked. The chain responded by taking on and training more staff to open more checkouts, and only then made sure that consumers knew about this initiative through a communications campaign.

Complicating the terminology still further, Carlson Marketing differentiates between commitment – which may be compromised for practical, functional reasons – and closeness to the brand. Planning director Mike Oliver says: “The more you get people to interact, even if – in an extreme case – it’s to make a complaint, which is handled well, the closer the consumer will feel to the brand.”

These principles hold true for both online and offline channels, says Oliver, as do the dangers of over-promising and under-delivery. As he puts it: “It’s better to under-promise and over-deliver.”

In broader terms, however, there are large differences in the loyalty issues faced by companies in the online and offline environments. He says: “If an online brand, such as Amazon, works well, the consumer will keep using it. Loyalty is based on technical excellence.” In research, he says, online-only banks such as Egg and Smile score more highly on criteria such as reliability and friendliness than do their high street competitors.

TNS’ experience bears out the idea that online loyalty works differently to its offline equivalent. “People are mostly concerned with website design and ‘stickiness’,” explains Arno Hummerston, head of TNS Interactive Solutions Worldwide. In many ways, however, loyalty is to the channel rather than to the specific website; even when a promotion takes a customer to a particular site, they can still visit two or three additional sites in a matter of seconds. “If you’re talking about selling online, you do have to get people to be loyal to your website,” says Hummerston. “But people tend to check out availability and pricing at a number of sites.”

Hummerston believes there are crucial differences in the way that purchasing decisions are arrived at online and offline: customer service and ease of use will often count for more than price. “If a consumer wants to buy a CD, they can go to certain sites, pay £9 for any chart CD, and receive it a week later,” he says. “At other sites, they will pay £13 but get it delivered the next day. Online brands have to understand the consumer in a completely different way and, above all, to understand how people use the website. At what point do people leave the site? When it gets to the page that confirms delivery times?”

The what, not the why

As is the case with EPOS data from bricks-and-mortar outlets, access to Internet log files can tell a website-owner a lot about what is happening, but not necessarily about why it is happening. “They might be able to see that people tend to leave on a given page, but they can’t tell why,” Hummerston points out.

Log-file analysis is generally carried out by technical staff, who do not necessarily have the marketing skills to understand consumer behaviour. Market researchers, on the other hand, can employ usability tests and website evaluations, says Hummerston. But to evaluate online shopping, he says, companies really need to interview people with direct experience.

Oliver has a similar perspective on the crucial elements that research adds to consumer data, online or offline. “The client has the transactional information, but still doesn’t know the triggers for purchase,” he says. “Our task is to find a pattern to disloyalty and then to plug the hole.”

Patterns of loyalty and disloyalty to technology-based products are more similar than might be expected to those exhibited with respect to traditional brands. Research International (RI) has carried out self-funded research into the mobile phone market in several European countries. According to associate director of marketing sciences Bruce Bogle, the aim was to identify what factors have been instrumental in retaining customer loyalty in the current generation of mobile phones, and then to ascertain whether the same criteria would apply for the next generation.

The urgency in all this, says Bogle, is that having paid out so much for 3G licences, mobile operators need to get early-adopters on board as quickly as possible and to speed up the process of reaching the mass market. But even without the need to recoup this huge investment, he says, the slowdown in the market for handsets – most sales now are of replacements rather than being first-time sales – would still require better-focused customer loyalty strategies.

Bogle says: “Given that this is seen as being a technology-driven market, you might expect companies which are perceived as innovators to have the edge.” In fact, he says, the creation of an emotional bond between consumer and brand and a strong heritage as a provider seem to count for much more. In this, he says, technology brands are no different from more traditional brands. “The evidence suggests that many of the brands that have been successful in building a niche along emotional lines will continue to do so,” he says.

It is this deeper identification with a mobile brand, says Bogle, which helps to make the fast-moving nature of the market acceptable to mainstream consumers. “People will stay with a brand if they think that the company is not just some hi-tech cowboy, throwing innovations at them now when they could just wait six months for the next best thing,” he says.

It’s not always the obvious

Even when it comes to the role of technology itself in customer retention, the obvious answers are not always correct. Getting to market first will not necessarily give a mobile company the edge, says Bogle. Nor does the most complex technology always win over large numbers of consumers.

What should, perhaps, most concern brands – online and offline, technical and non-technical – is a general decline in loyalty which research has been tracking over several years. “Disloyalty is becoming the norm, especially among younger and more affluent consumers,” says Oliver. This trend has been confirmed by the annual Relationship Builder research project carried out in conjunction with NOP. There may be no easy answers, but using communication and interaction to give consumers the sense that they are recognised as individuals is a step in the right direction, he says.

Oliver and Bogle will present their findings at a British Market Research Association conference in London on October 1.

The Research Show, backed by Marketing Week, takes place at London’s Olympia from October 1 to 3, allowing market research clients and providers to find out more about latest research intelligence and see new products and services in action.

Many leading European and US market research companies are exhibiting at this year’s event. The popular seminar programme has 27 sessions to choose from, designed by an independent consultant specifically for the show. Leading clients and agencies will be passing on their expertise.