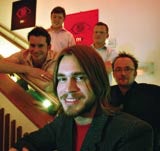 While the nation weeps, left forlorn by the departure of this summer’s Big Brother freakshow, spare a thought for the ghosts of BB’s past. Alex Sibley, for instance, the hygiene-obsessed pretty boy from BB series three, is now reduced to hanging out with Scots ad agencies in the hope of being asked to photocopy expenses forms and file tender documents from local authorities.

In reality (a controversial word when dealing with BB), Sibley showed up to Glasgow-based Nation1’s fifth anniversary bash – themed around series five of the Channel 4 prison drama, or whatever Big Brother is meant to be. Apparently, Federico, the potty-mouthed, Avid Merrion-impersonating Glaswegian from series four, popped by as well. Presumably he has run out of D-list showbiz parties to attend.

Apparently there is no great affection between the pair, and the atmosphere was said to turn frosty for a while. However, the Diary is sure that the opportunity to imbibe copious free booze without having to perform some ridiculous task first meant that neither contestant tried to evict the other.