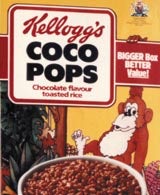 Cereal brand Kellogg is extending into the hot cereals market for the first time with the launch of hot variants of Coco Pops, Fruit ‘n’ Fibre and Hunny Bs. The products will go on sale this autumn.

The cereals, which will be packaged in individual pouches rather than boxes, are made by adding water and being heated in the microwave. They are aimed at both adults and children and it is understood that the launch with be backed by a significant marketing campaign, including television.

The hot cereals category is an area of the cereal market that is seeing significant growth. According to Mintel data, the market has nearly doubled in size since 2001 and is worth £78m. The growth of hot cereals is attributed to the convenience of the product, which can be cooked in a microwave either at home or in the office.

Growth in the market is largely credited to the success of Quaker Oatso Simple, which was launched in 1998. Alongside Weetabix-owned Ready Brek, Oatso Simple accounts for more than half of the market.

Kellogg has a 40 per cent share of the UK’s £1.2bn cereal market, although Weetabix is the nation’s favourite cereal after it overtook Kellogg’s Corn Flakes in 2002.