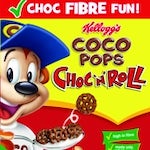 The ads by Leo Burnett, will air on TV over the next month. They will then re-air between 11 October and 7 November, and again between 22 November and 19 December. Digital activity will complement the TV ad.

The new cereal is Kellogg’s first with nutrition credentials that pass the stringent Food Standards Agency’s nutrient profile for advertising to children. However, the company has decided against this.

Greg Peterson, Kellogg UK managing director, says: “The bottom line is mums don’t want their children to skip breakfast. The fact is one in five do, and spend £656 million a year on a sweet shop breakfast on the way to school.”

Outdoor and radio ads will also run later on in the year.

Kellogg says that by mid-2011, it will remove 15 percent of sugar in all its Kellogg’s Coco Pops cereals, effectively reducing sugar content to one and a half teaspoons per serving and removing almost 750 tonnes of sugar from the nation’s diet annually.