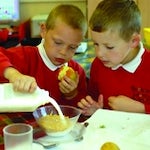 The company is investing £1.5m on the campaign, which will include broadcast, print and online advertising.

This will be complemented by a PR programme and on-pack promotion in order to “put the subject of breakfast firmly on the national agenda.”

TV advertising will continue with the animated version of Kellogg’s founder WK Kellogg and will run over six weeks in the summer along with national radio and press.

Kellogg’s is also bringing back its Free Cereal promotion to support “Wake Up To Breakfast”. The company says that the promotion saw over 230,000 free boxes of cereal given away last year, making it one of its most successful promotions to date.

From today (20 July) until October 2010, shoppers can collect three individual on-pack codes, enter them online and print off a voucher entitling them to a free box of Kellogg’s cereal.

Kellogg’s says its “Wake Up To Breakfast” campaign aims to get British families back into the breakfast habit and will primarily target parents and families.

Peter Harrison, marketing controller at Kellogg’s, says: “Our own research shows that parents are aware they and their children should eat breakfast to give them the best possible start to the day. Despite this, one in five British adults and one in six British kids still skip breakfast. Our message is designed to reach out directly to breakfast skippers and show them the benefits of eating breakfast.”

Harrison will takeover from departing marketing director Kevin Brennan on Thursday (22 July) on an interim basis. Brennan is joining Premier Foods as general manager of the meat free division.