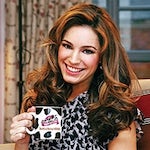 The ad, was created by HS&P, which handles relationship marketing for Sony but won the brief for the ad in a process led by Sony marketer Matt Coombe. It will break during the run-up to the World Cup is for Sony’s new flatscreen television and former England star Stuart Pearce is seen delivering a set to the “retirement home” in time for the opening game. Former England managers Terry Venables and Graham Taylor appear in the ad, as does Scotland star Kenny Dalglish. It is thought a look-a-like of Sven Goran Eriksson attempts to chat up Kelly Brook and a look-a-like of Steve McClaren appears in his famous “umbrella” pose. .

Last week Anomaly unveiled its first advertisements for Sony Europe since it won the £50m account from Fallon last year. The brand campaign centres on two main executions; one ad featuring children performing in a rock concert setting and and another with children appearing as if playing in a World Cup football match. A digital campaign supports the television ads.

This story first appeared on pitch.marketingweek.co.uk