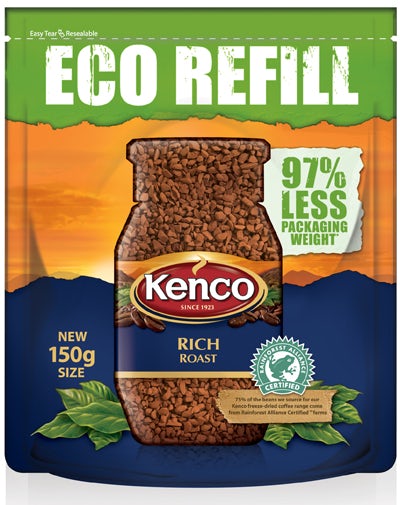 The new Kenco Eco Refill pack format, which the company claims is a UK first, has 97% less packaging weight than the Kenco glass jars and has been developed to encourage consumers to switch to the more environmentally friendly pack.

The latest push follows the brand’s commitment to source the coffee for its entire range from Rainforest Certified farms by 2010. It launched a major above-the-line advertising campaign last year to promote its sustainability pledge.

The new TV ad for the Eco Refill pack will feature actress and activist Joanna Lumley as the voiceover. Created by JWT, the campaign will also include outdoor, in-store and digital promotions that will run until next year.

PR activity, developed by GolinHarris, will be fronted by TV personality Amanda Holden and eco-expert Oliver Heath. They will be involved in a new nationwide “Waste Less Challenge”, which will be promoted in online display ad created by Arc. The ads will drive consumers to a new website to watch films featuring Holden and Heath, and also allow them to enter an online competition to win eco-breaks and coffee canisters.

In the instant coffee market Nestlé’s Nescafé remains the market leader. But according to Kraft, Kenco instant coffee is now worth £116m and has seen a year on year growth of 16.2%.

Subway has reduced salt levels in its sub sandwiches by an average of 19% as part of its Health & Wellbeing Commitments drawn up last year in conjunction with the Food Standards Agency (FSA).

Who is equipped for 21st century marketing well enough to control how their brand is represented online? Marketing Week and Google held a roundtable discussion with leading marketing experts to uncover how ready the industry is for a digital future.

The Food Standards Agency is looking to create a single corporate identity with the Meat Hygiene Service and has put out a design and brand tender.