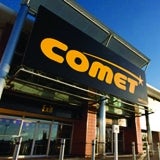 The group, which is the third largest electricals retailer in Europe, is said to be drawing up plans to spin off the ailing retail chain and delist from the London Stock Exchange.

Breaking up the group and cutting Comet loose would allow Kesa to focus on its profitable French operations trading under the Darty brand.

Last week Comet reported a 7.7% fall in like for like sales for the past year and its managing director Hugh Harvey stepped down to be replaced by former commercial director Bob Darke.

Darty, in comparison, reported a 2% increase in sales.

If the plan goes ahead and Comet closes its UK stores, rivals Dixons and Best Buy would be likely to buy up some sites.

Analyst Andrew Wade, associate director of Equity Research Retail says if Kesa were to dispose of Comet it would be a “significant positive” for both the Kesa Group, and for Dixons Retail in the UK if hundreds of competitor stores close.

He adds that Kesa would be left with Darty – a quality French operation of John Lewis standards – “unencumbered by the disproportionate focus that Comet receives”.

Kesa CEO Thierry Falque-Pierrotin has described the UK as the “toughest [electricals] market” in Europe.

Best Buy, which has been operating in the UK market for 12 months, has yet to report full year results but has seen number of senior management leave the chain in recent months.