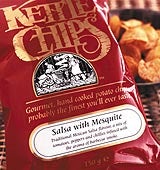 Kettle Foods, the makers of Kettle Chips, has appointed its first marketing director as it prepares to do battle with Walkers in the premium crisp sector.

Keith Stevens joins Kettle Foods from Polaroid, where he was European marketing director and export general manager. Before that he worked for 11 years at Mars, where he held a number of marketing roles.

He arrives at the company as Walkers plans to move into the premium crisp market, with the launch of Sensations. Advertising featuring Victoria Beckham and Walkers brand icon Gary Lineker will back the crisps, which will be available from April.

Stevens, however, is not worried by the snack food giant’s entrance into the market. He says: “I think Kettle has a unique and special brand that is by far the number one in terms of the adult premium snack market. Kettle also has fiercely loyal customers.”

He says that the company would not be responding to the threat on its market share by looking for an agency and would stick to marketing its products through PR, its website and database.

Stevens adds: “Kettle is appealing to a very discerning group of customers, typically ABs and C1s. I do not think it is in the game of mass communication.”

Stevens adds that, over the coming year, the company would be developing products in the UK and expanding into Europe.

Holsten UK is to launch the nation’s first “alcopop lager” when it unveils a fruit flavoured beer – likely to be called Holsten Fusion – in May. Marketing director Andy Edge says incumbent agency TBWA/London will produce a multi-million pound campaign to promote the product, which will come in a range of fruit flavours. Sources […]

WCRS has been appointed to handle the launch advertising for LMI’s as yet un-named rival to Air Miles with a budget of about &£20m. WCRS won the business after pitching against Leo Burnett for the work. The venture’s marketing director Richard Campbell is thought to have favoured WCRS having worked with the agency in his […]

The Greater London Authority (GLA) has appointed marketing manager Simon Farley as its first sponsorship manager. Farley will be responsible for attracting sponsorship for London events, including the annual anti-racist Respect festival and the London Day celebration, which marks the anniversary of the establishment of London’s elected government. He will also seek a sponsor for […]