Speaking at the iMedia Brand Summit event in London today (23 April), KFC’s CMO David Timm said KFC has transformed its strategy over the past year after feeling that consumers had lost their relationship with the brand.

“All brands go through phases, and bad years in business are a positive thing,” Timm said. “It forces you to reappraise and think about what’s happening in your competitive environment.”

For KFC, this involved changing the marketing model that had “done its time” for the brand, according to Timm, and looking to neuroscience research to determine how consumers make decisions.

“Almost all advertising is not emotional, but people make decisions emotionally, not rationally,” Timm said. “We need to connect with people emotionally through advertising and not through reason.”

In celebration of its 50th anniversary, the brand launched its “Families” campaign in February, fitting into its emotional strategy with an ad telling the story of a boy welcomed into a new foster family.

It also appeared in BBC’s “Billion Dollar Chicken Shop” series, a behind-the-scenes TV documentary, which saw KFC follow in the footsteps of similar moves by Greggs and Iceland.

The four-part documentary was a “high-risk strategy” for the brand according to Tim, as it showed KFC open its doors for a behind the scenes look at how it mass produces its chicken, the working environments of its restaurants as well as how it handles food waste.

However, he adds that when brands go through tough times, they’re expected to “take bigger risks and become bolder”, adding that social media tracking has seen KFC’s “heavy users” find reasons to “like the brand more” as a result of the documentary, while the “in between” users “feel a bit better about us”.

Timm says part of KFC’s turnaround strategy involves looking to other channels, with digital set to be a large focus for the brand as it looks to “provide the right message at the right time”.

“We’re still TV-led, but we’re not far away from needing digital to take the lead,” he said, adding that the brand is “behind where it should be” on the channel.

“Digital is becoming so pervasive that we’re approaching a point where you won’t have a penetration strategy without it,” he added. “We’re starting to think about it as part of the marketing mix, and we’re working towards it becoming the centre of gravity.”

Part of this strategy involves an increased investment in mobile, with KFC becoming the latest brand to implement click-and-collect mobile payment technology in January by signing up with London-based Judo Payments.

While the move was an effort to increase the satisfaction of its “loyal customers” by reducing the average time to pay, Timm says the brand is now looking to focus on its “light and medium users” in order to drive penetration.

“Heavy users give you less permission to innovate and you get stuck with what you’re offering,” he concluded.

KFC is aligning TV, print, outdoor, PR and digital together for the first time to mark the arrival of its pulled chicken range, a tactic it hopes lifts the premium credentials of the brand. 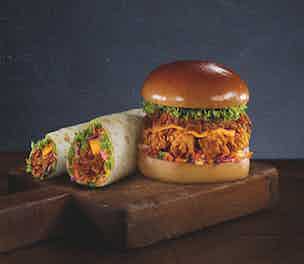 KFC is looking to steal a share of the £68.4m BBQ style food market in the UK with the launch of a pulled chicken range it claims is the “biggest overhaul” to its menu in 20 years.