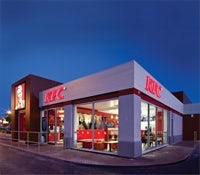 Leaflets containing nutritional information such as the calories, salt and fat information of its products, in additional to its provenance and its history will be in-stores by July.

Jennelle Tilling, KFC vice president of marketing says the move is part of KFC’s ongoing commitment to be more transparent with its customers.

“It’s about helping the consumer make an informed choice,” she adds.

The move comes as KFC is set to launch Brazer, its first non-fried griddled range later this month. The three-item range, which consists of a burger, a tortilla-style wrap and a salad, contains less calories, saturated fat and salt than regular menu options.

Tilling says the healthier range could be expanded. “It’s not just about being innovative but it’s an important part of our nutritional journey,” she says. “I think we’ll continue to innovate in this [area]. I can imagine other new products.”

KFC is one of the 170 brands to have signed up to the Government’s “Responsibility Deal” to promote healthy living and has pledged to put calorie information on menus.

Fast food chains have come under fire by critics in the past for not committing enough to promoting healthy lifestyles. However, Tam Fry, National Obesity Forum board member, welcomes the range. “We would be supportive of any company that was serious about making choices healthier.”