KFC is shifting its marketing focus way from “shouty” messaging and “real” food to building brand love among consumers.

It has introduced a new visual identity, created by BBH, which focuses on typography-led executions and has a Colonel stamp of quality. All communications are also characterised by a witty tone of voice.

As part of the shift, KFC is releasing an outdoor poster with the headline ‘It’s f******n’ good’, which it says brings “a whole new edge” to the brand’s ‘Finger lickin’ good’ tagline. The poster will also run across KFC’s social and digital channels.

Meghan Farren, CMO at KFC for UK and Ireland, told Marketing Week that the brand’s outdoor and print communications have previously been “shouty”. It is now looking to create a consistent tone of voice and build brand recognition in an increasingly competitive marketplace.

When asked whether the latest ad could be considered equally provocative, she said the brand was not “provocative for the sake of being provocative” and was simply using wit and humour to grab attention.

“We are probably the most strongly associated brand when it comes to chicken and great taste, which we have spent many years in the past communicating. Now we believe there’s also a job to do in building the brand, so people can have an emotional connection with KFC,” she said. 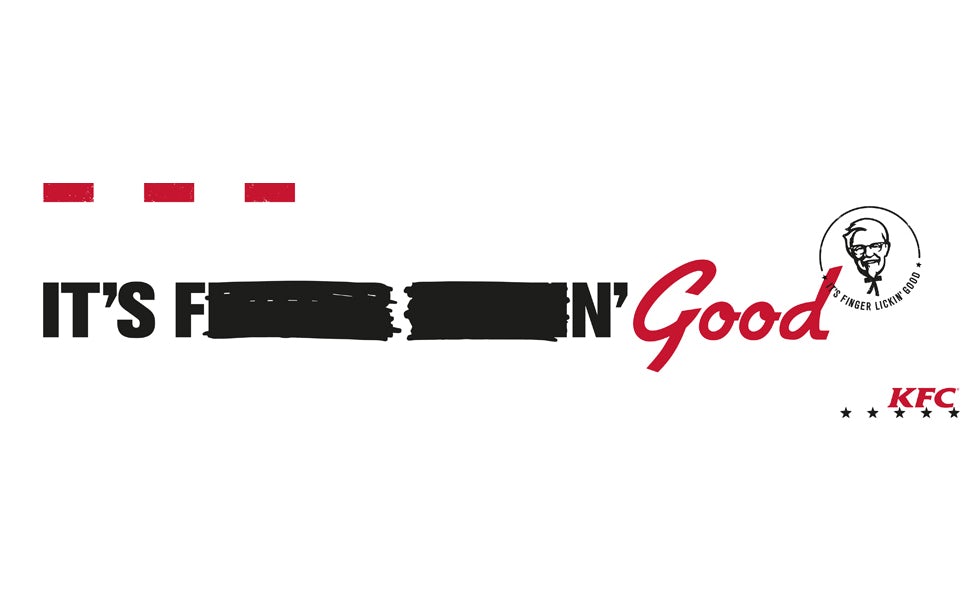 The move comes as competition in the fast-food market grows. Farren said she sees delivery disruptors such as Deliveroo as rivals because they are providing food quickly and conveniently.

“It’s getting much more competitive. In the category [competitors] are spending more than three to five years ago, and especially with new delivery players we want to cut through to consumers, so every thing we do looks and feels KFC,” she said.

Its more traditional competitors are also changing. For example, McDonald’s has been trialling table service and launched a “premium” range earlier last year.

Farren believes that even though consumers still want good value food, what it looks like in terms of service is rapidly changing. That is why KFC has been trialling delivery and launched an app to test different ways of ordering in its restaurants.

“Convenience and value are at the heart of what we do. I don’t see that changing. But we obviously want to stay relevant.”

What has not changed is KFC’s focus on chicken. Although the brand is innovating through its food, it is mainly focused on introducing new flavours rather than any more drastic changes in its menu.

As she concluded: “[We want to focus on] what we do really well, rather than branch out and do something completely different. Consumers know us for a particular thing, and they love us for it. That’s a good reference point, where people are still familiar with your product and then you add something new. And that’s how you innovate – it’s 80% familiar, 20% new.”

With The Marketing Academy recently selecting the next 30 emerging leaders to take part in its 2016 scholarship programme, the 2015 participants each handed out their advice on how to be a successful marketer.