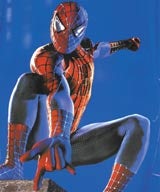 Kentucky Fried Chicken (KFC) has signed a deal to promote the film Spider-Man in its outlets. The film is due for UK release on June 14.

Copyright Promotions Licensing Group has brokered the licensing deal on behalf of Sony Pictures and Marvel Enterprises. The KFC promotion will be backed by television advertising, through Ogilvy &amp; Mather, at the end of May.

The film, which stars Tobey Maguire as the teenage superhero, is expected to be one of the summer’s biggest cinema hits. It opens in the US this Friday (May 3).

KFC will be offering four different Spider-Man collectibles to be given away with children’s meals. The collectibles are figurines of Spider-Man and his arch enemy the Green Goblin, together with two different wrist web-shooters.

Other companies which have struck licensing deals to capitalise on the film include Cereal Partners, for activity across its children’s cereal range; David Halsall, for wheeled toys; Blues, for leisure and swimwear; Avana Bakeries, for celebration cakes; and Spearmark, for lunchboxes.

The Cinema Advertising Agency (CAA) has increased its prediction for 2002 cinema admissions on the basis of strong first-quarter figures, which saw a year-on-year increase of 37 per cent. The CAA now expects 2002 admissions to be up 11.5 per cent to 174 million.

The body originally predicted five per cent growth on the 2001 figure of 156 million.

A company specialising in lorrymounted advertising has launched, claiming to be the first mainstream company of its kind in the UK. The company, called Road Ads, is headed by managing director Nigel Petty, who co-founded Megaprofile; and outdoor advertising veteran Michael Higgins, who is sales and marketing director. The company says it will adapt all […]

Marie Claire, IPC Media’s women’s glossy, is to flood the newsstands with an additional 60,000 copies, following the media frenzy surrounding its June issue, which comes out today (Wednesday) and carries David Beckham on the cover. The printing of extra copies before it goes on newsstands is the first time the magazine has made such […]

Revlon UK managing director Kerry McCarter has left the company without a job to go to. He has yet to be replaced. McCarter’s exit from the cosmetics and haircare company follows a series of sudden departures at the company’s New York headquarters, including that of chief executive Jeffrey Nugent and global marketing chief Cheryl Vitali, […]