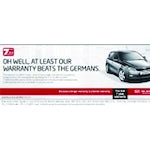 The automotive company, which is a sponsor of the FIFA World Cup, developed two variations of the ad campaign to run whatever the outcome of the England v Germany second round World Cup game.

The ad, using the strapline “Oh well. At least our warranty beats the Germans” is running in The Times and The Sun today (28 June).

The alternative ad read: “Our warrantee beats the Germans too” and would have run if the England team had beat Germany yesterday.

Simon Hetherington, marketing director of Kia Motors UK, says: “We know the result we want to see, but placing advertising in advance means being ready for anything – so our advertising agency Inocean came up with two alternative treatments.”

The campaign is part of Kia’s World Cup tie-up with News International brands The Sun, The Times, The News of the World and Sky, to maximise its FIFA World Cup partnership.

The Hyundai Kia group is the Official Automotive Partner of FIFA until 2014 and is providing ground transportation for the 2010 World Cup in South Africa.

Kia Motors introduced its seven-year warranty on every model in its range in January 2010, and claims it delivers Europe’s best manufacturer-backed protection for new car buyers.