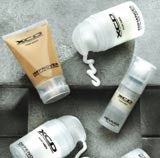 King of Shaves (KoS) is considering a complete relaunch of its male skincare products for early next year, and is likely to group the products under a new sub-brand to distance them from the main shaving range.

While no name has been finalised, the company is known to be considering King of Skin.

Quentin Higham, commercial director for Knowledge Merchandising Inc (KMI), the holding company for King of Shaves, confirms a relaunch is being considered. It is likely it will include new formulations for existing products in the range, additional products and new packaging. The company has already performed a similar operation with its women’s shaving range, which was relaunched this spring.

In September, KoS is launching an aluminium-free deodorant line under the name King of Deos, targeting women who are aware of the supposed health risks involved in deodorant products that contain aluminium. Higham also confirms the company is still planning a move into the razor and blades market with King of Blades.

In addition to King of Shaves, KMI also manufactures a range of haircare products under the Fish brand, licensed from the Soho male hairdressing salon, and fine fragrances and toiletries licensed under the Ted Baker name.

Media buying for KoS is by BLM; there is no creative agency of record. The last major campaign for the brand was a radio ad produced on a project basis by Manchester agency Big. The ad will run again this summer.