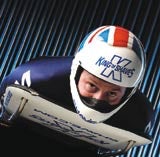 King Of Shaves, the male grooming brand, is to sponsor British Winter Olympic gold medal hopeful Kristan Bromley in a deal believed to be worth &£1m.

Bromley is the current World Cup and European bob skeleton champion and will be entering next year’s Winter Olympics in Turin, Italy.

The extreme sport requires entrants to race head first down a bobsleigh track on a mini-sledge and the two-year sponsorship deal includes the development of a branded razor, helmet and race suit branding.

It also takes in clothing branding and the right to use Bromley’s image in advertising and point of sale. Bromley will also make public appearances on behalf of King of Shaves.

A spokesman says: “The extreme nature of the sport and Kristan’s success appeals to King of Shaves’ core market of 18- to 34-year-old males. There are obvious connections between shave and face and blade and ice.”

Parent company KMI has plans to launch an oral care range called King of Smiles this year among other initiatives (MW November 25, 2004).