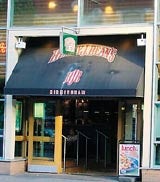 Snack-food manufacturer Kitchen Range Foods has signed a deal with bar and grill brand Henry J Beans to launch a chilled burger-and-bun snack product. The product is expected to be launched this summer.

The burger will be positioned as a premium snack and will be made with high-quality ingredients such as Aberdeen Angus steak. The product is being launched in the trade sector in the next month and is expected to go on sale shortly afterwards.

Huntingdon-based Kitchen Range, which is owned by international food group OSI, wants to develop its retail business by launching a range branded across a number of categories. Head of marketing David Young says the company is working on a number of branded products.

This includes a range of Cadbury-branded mini-doughnuts, which will be launched in September in major multiples. The doughnuts are packaged with chocolate dipping pots and a pot of chocolate chunks or honeycomb pieces. The launch will be supported by a £250,000 outdoor campaign.

OSI manufactures and supplies a range of products, from meat and poultry to snack foods. It supplies products to the major supermarkets and food-service chains such as McDonald’s.