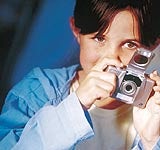 Eastman Kodak is extending its worldwide sponsorship of the Olympics through to the 2008 Games, with an estimated $100m (&£62m) deal.

The company first supported the modern-day Olympics when it relaunched in 1896, and is the longest-standing sponsor. The new deal will cover both summer and winter Games.

Kodak uses the event to showcase a wide range of products and services.

As part of the deal, the company will set up the world’s largest photo lab, the Kodak Image Centre, to support the 1,000-plus accredited photographers covering the Games. It will also provide health imaging equipment for the athletes’ onsite medical centre.

Kodak remains part of the Olympic Programme or “TOP” sponsors, which include Coca-Cola, Visa International and the Sema Group, among others.

The announcement will be a welcome boost for the Olympic movement, which is facing an estimated Aus$200m (&£80m) income shortfall for this summer’s Games, to be held in Sydney. Sources say the shortfall is a result of receiving Aus$120m (&£48m) less in sponsorship revenue and Aus$73m (&£29m) in ticket sales.