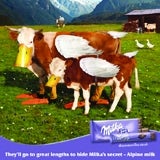 A Kraft spokesperson says the agency was appointed because it demonstrated an understanding of the “cultural perspective of the brand and its strategic direction”.

He adds that Crispin Porter & Bogusky understood what consumers are looking for from the brand.

The agency was awarded the global account following a competitive pitch and replaces the incumbent Ogilvy.

In April Kraft launched an ad campaign, created by Ogilvy, to establish the brand in the UK by emphasising Milka’s quality credentials and “Alpine” positioning.

Following its takeover of Cadbury in the UK, Kraft announced that it would bring together the research and development for all its chocolate brands including Milka and Cadbury Dairy Milk at the Cadbury headquarters in Bournville.