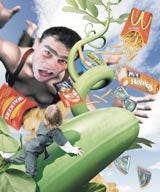 After decades of encouraging customers to consume vast quantities of snack foods laden with sugar, fat and salt, food companies are trying to convince the world that they are becoming purveyors of high-quality, healthy fare.

Kraft announced at the beginning of last week that it was introducing a range of measures to combat a worldwide rise in obesity by making its products “healthier” and would cap portion sizes and ensure products have healthier ingredients.

By the end of the week, a number of food companies, including NestlÃ©, Cadbury and United Biscuits, followed suit by saying they would reduce levels of hydrogenated vegetable fat, linked to obesity and heart disease, in their products. This follows similar announcements by Mars in May, when it promised to cut hydrogenated fat in Mars Bars and PepsiCo in the US last September, which promised the same for its Doritos, Tostitos and Cheetos brands. The question for marketers is whether snack brands can be as profitable on a health platform as they are in their current positioning, and can they make more money out of smaller portions?

The dash for the healthy sector has been sparked partly by fears of lawsuits in the US accusing the companies of knowingly encouraging obesity and bad health. Companies are also concerned about restrictive legislation being considered by world governments. A World Health Organisation (WHO) report, published earlier this year, blamed the food industry in part for the rise in obesity and has raised the possibility that governments will legislate to clamp down on poor nutrition (MW May 1).

There have already been a number of lawsuits in the US against food companies for promoting unhealthy eating. None has yet succeeded. But Kraft’s parent company, Philip Morris, was almost bankrupted by lawsuits against its tobacco operations by smokers and US states during the Nineties. Some of the same lawyers who have been so successful in pursuing action against the major tobacco companies for promoting smoking while knowing it was harmful and addictive, are now turning their attention to the major food manufacturers.

If food companies can demonstrate that they have taken efforts to ensure their products and the way they are marketed do not lead to obesity, this may offer some protection against litigation. A damning indictment against tobacco companies was that they knew the dangers and addictive nature of their products but chose to do nothing and watch the profits roll in regardless.

Obesity-related illnesses in the US are responsible for some 300,000 deaths a year, the second biggest killer after tobacco, linked to 430,000 deaths. The number of people overweight is rising fast, almost two-thirds of Americans are overweight and a quarter of people under 19 are overweight or obese – double the figure 30 years ago. Obesity levels are rising fast in the rest of the world too.

What is significant about Kraft’s statement is the fact that it admits food manufacturers have played a part in provoking the obesity epidemic that is sweeping the world through their marketing of fatty and sugary products. The company’s range of initiatives to “help address the rise in obesity” include reducing the size of single portions, reformulating products to make them healthier, ensuring marketing and advertising does not encourage overeating and axing all marketing initiatives in schools.

While many food manufacturers have healthy products in their portfolios, Kraft says it will hire a panel of nutritional experts to examine all its products to see whether it is possible to reduce levels of fat, salt and sugar.

Manufacturers had previously blamed lack of exercise rather than over-eating on snack foods for the rising obesity rates and the growing incidence of obesity-related illnesses identified by the WHO, such as Type 2 diabetes.

But now a Kraft spokesman admits: “The food industry has played a part in this, so have social changes and lack of physical exercise.” He adds: “What we are trying to do is play a part in addressing the issue. There are a lot of factors involved in the rise of obesity and the food industry is part of that. We need to play our role as a company, we will do what we can.”

Some in the industry play down how much of a fundamental shift these changes will be for food companies. Rob Rees, an interim marketing director who has worked at a range of companies including Mars and Campbell’s, believes this is just another of a long series of health concerns that food companies have had to deal with in recent times. In the Eighties there were fears about colourings in food and recently there have been worries about BSE and genetically modified organisms.

“Every year there has been something to deal with. These companies have large regulatory departments; they will get through it. It is just another so-called crisis for people in the industry,” he says. In the long term, he hopes this will encourage companies to “put quality back into their products” by using better ingredients and through new product development.

While none of the manufacturers that were asked for their reaction to Kraft’s announcement say they are reducing portion sizes, some claim they are taking steps to tackle the obesity crisis.

NestlÃ© says: “We realise this issue is of great concern to consumers. The first step is to improve consumer communication through clearer labelling, and support this by consumer care lines and a dedicated website. This is part of a wider review being undertaken to tackle this issue.” Heinz says it is “extremely proud” that it has had a fat, salt and sugar reduction programme in place for over 15 years “and will continue to reduce the levels”. And a Unilever Bestfoods statement says: “By increasing our focus on the health attributes of our brands and continuing to develop and market products that have a positive benefit to healthy eating for all groups of the population, we believe we have a real contribution to make to the diet of UK consumers.”

It says it has low-fat versions of many of its products, but expresses the view held by most in the industry that: “It is important that all stakeholders focus not just on single issues but approach the problem more broadly by emphasising dietary balance, physical exercise and education.”

The fact that Kraft’s rivals have seen the need to prepare responses to their competitor’s announcement shows the level of corporate concern about their part in the obesity crisis and the threat of litigation or at least legislation.

Kraft says it will wait for the appointment of its panel of nutritional experts to decide on ideal portion sizes, though the spokesman doubts many products will have their size cut, but rather that where it had plans to increase sizes, these will not go ahead. It will be interesting to see how Kraft manages margins with the smaller products – and whether it will charge the same for less.

Rise of the megabite

Some nutritionists say that many portion sizes available in snack products and fast-food outlets are up to 20 per cent too big. The so-called “super-sizing” of products is blamed by many critics as a major force behind the obesity epidemic. In his book Fat Land – How Americans Became the Fattest People in the World, Greg Critser blames the fast-food industry’s sale of super-sized portions for contributing to weight problems.

Increasing portion size has great appeal to some consumers who believe the super-sized products offer better value for money because they are marginally more expensive than standard sizes. But in fact the price mark-up will outstrip the cost of the increased ingredients used, so delivering manufacturers better margins.

Critser says the original rationale behind super sizing was to increase volume consumption of fast-food because people would not buy two portions of fries, for fear of seeming greedy. On the other hand, holding a super-sized portion can make people, especially children, feel “empowered” he adds, a bit like driving a big car.

There has been a move to super-sized products in the UK. Burger King offers regular, large and super-sized portions for many of its products. NestlÃ© offers a super-sized Kit Kat, though it insists this is only a small part of its portfolio that includes many mini versions. Mars offers giant Mars Bars and Snickers.

Kraft’s announcement offers it the chance of heading off the threat of legal action, but also provides it a platform for launching premium-priced products. One observer says that food companies need to return to good-quality products, which they have constantly debased in the search for cost-savings to keep shareholders happy. While product sales may be rising at less than three per cent a year, stock market investors are demanding a return of more than ten per cent. Many manufacturers have used “value engineering” – substituting ever-cheaper ingredients – to strip costs out of their products.

Companies may downgrade the quality of the ingredients slightly – and imperceptibly to consumers – every year. Since ingredients and packaging account for some 50 per cent of manufacturers’ variable costs, this is an effective way of increasing profits through cost-cutting while keeping prices the same. But over a number of years, this quality stripping can substantially debase the product and the short-term gains may destroy the brand in the long term.

An observer says: “Kraft might not experience a sales fall, but by improving the quality of its ingredients it will suffer falling profits in the short term. However, the initiative should enable the company’s brands to survive long after many of its cost-cutting rivals’ brands have been worn down.”

Kraft is considered outside the top rank of global food companies such as Unilever and NestlÃ©, since it does not have commanding positions in many markets outside the US. Its rivals, such as Unilever’s Birds Eye, have already begun experimenting with quality positionings, aiming to provide “fresh, nutritious food”, so if Kraft is to keep up with the leaders, it must prove that there is just as much money to be made from promoting healthy eating as there is in pushing junk food.