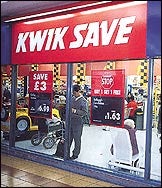 Kwik Save is to launch an own-label range of products carrying a new logo for the chain as part of a recovery programme, which will also include a facelift for its 750 stores.

The supermarket phased out its value own-label No Frills range from February 1999, replacing it with the Somerfield Basics range. This will now also be withdrawn.

A Somerfield group spokeswoman says: “We are looking for a consistent corporate identity. Somerfield products in the stores confused our [Kwik Save’s] traditional customers.”

The own-label range, to cover products from bin-bags to orange juice, will carry the new logo aimed at making Kwik Save stores “more modern, friendly and approachable”. The range will be launched in September.

A spokeswoman for design agency Design House, which has been commissioned to create the logo, says: “The aim is to revitalise the brand at the budget end of the sector. The brand must reflect the wishes of its loyal customer base, such as maintaining its local and British feel.”

Somerfield’s preliminary results for the 53-week period ending April 29, published earlier this month, show a 14.7 per cent like-for-like sales decline for Kwik Save, compared with Somerfield’s decline of 1.8 per cent. Profit before tax for the same period fell to £70.7m, compared with £218.4m for the previous year. Kwik Save responded to the profit slump by committing itself to rebuilding the brand.

But Retail Intelligence analyst Richard Perks says: “A facelift and own-label range is not enough. Kwik Save needs a fundamental rethink and must decide whether it wants to compete with the major supermarkets or become a true discount retailer in the vein of Aldi.”