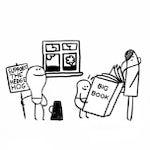 The series of animated online films, conceived and designed by Saatchi & Saatchi and Ridley Scott Associates, feature a family discussing what the manifesto means to them.

According to Saatchi & Saatchi, the films aim to “engage more people than ever before” in the contents of the manifesto.

Labour’s manifesto promised to setup up a website “for parents to register their concerns about sexualised products aimed at their children” to allow parents to “challenge aggressive or sexualised commercial marketing”. A similar idea from the Conservatives drew criticism from the advertising industry earlier this year as an example of “policy on the hoof”.

Other Labour pledges include:

The Conservative Party will unveil its manifesto tomorrow (13 April), while the Liberal Democrats will make its pledges on Wednesday (14 April).