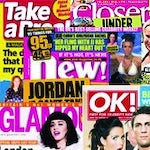 In the last set of ABC figures the sector was up 21% which observers say is partly due to a number of massive celebrity stories including the death of Michael Jackson and Stephen Gately and Jordan and Peter Andre’s split, in the previous period.

In the previous six month ABC period, OK! was sold in multipack with stablemates New! and Star for 12 weeks which boosted circulation.

Andy Taylor, head of magazines at Carat, says publishers selling multi-packs at discounted prices is still an issue within the women’s weeklies sector, and will continue to be a trend.

He adds that OK!’s huge fall can be “attributed to the huge spikes they saw last audit due to some big breaking stories and this decline is a return to their natural level.”

“Multi-packing has served New! and Star well and this is a trend that will continue though this sector. These figures also highlight the fickle nature of the celebrity consumer as the stories dictate if they are to purchase.”

NatMag’s Real People was the only other women’s weekly to gain more than 1% in circulation over the period.

Up 4.2% to 216,038 over the six months and 11.5% over the year, although its ABC figures has been boosted by a multi-pack promotion alongside sister titles Reveal and Best which saw gains of 0.4% and 0.3% respectively.

Drew Kirkland, group publishing director of NatMag’s Weeklies says the success of the titles is down to a “clear editorial strategy and significant investment to communicate what our brands are about”.

NatMag says it has invested in multi-million pound above the line campaigns to support Reveal including partnership activity and retail campaigns.

A handful of the weekly titles including Hello! (0.8%), Woman (0.7%) also saw slight increases in average circulation.